Do you remember these

Any motorcycle related topics that you want to discuss - no politics, religion, insults or offensive material

Do you remember these

I nearly bought one 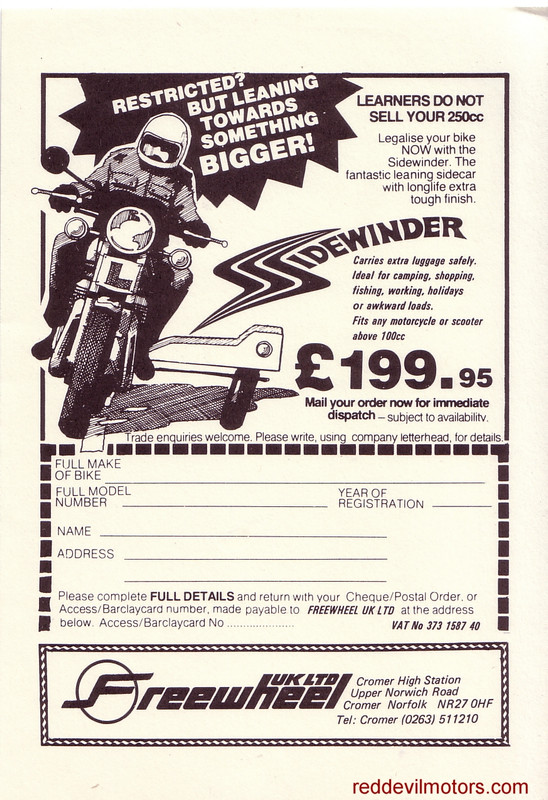 Yes. If I recall, didn’t it allow you to ride any bike, even if you hadn’t passed your test as it was classified as a sidecar?
http://www.kittos.co.uk
Best roads: 623 Burgos to Santander. A back road to Metz; can't remember which!
Bumble, my 700 Transalp.
Gupta, my 350 Bullet.
Sold my Airheads, what an idiot.
Too many bikes have come and gone, trying to be sensible now!
Top

Yes, I remember them coming out. They were made to 'get around' the 125cc learner laws and I think their emergence coincided with the reduction of the learner limit to 125cc. That would be in 1981. They had no carrying ability and were otherwise pretty pointless.

I believe a number were sold but I don't recall ever seeing one in use.

The concept wasn't unique their have been a number of similar concept designs including one by Flexit (who claim the first patents in 1977). There is even a version with two sidecars one on each side (https://thekneeslider.com/wallick-lean- ... decar-rig/). This also seems to have a small wheel on either side... can't really see why... which would make it a six wheeled motorcycle combination... maybe.

Sidewinders still appear on sale occasionally if anyone wants to experiment.

It does tend to blur the boundary lines that dictate what a vehicle is.

Like the three wheeled Peugeot with two front wheels, I believe that is still classed as a two wheeler presumably because the distance between the front wheels is under some defined distance.
Top

Or isnt it the lack of enclosure for the operator? The BMW C1 was a two wheeler but no helmet needed as the "driver" was strapped with a safety belt and enclosed in the vehicle.
1978 BMW R100S "Naked"
1999 650RS W3 Replica "Twin With a Kick" 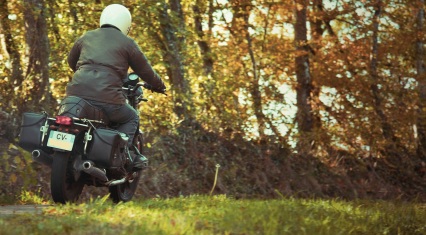 Or isnt it the lack of enclosure for the operator? The BMW C1 was a two wheeler but no helmet needed as the "driver" was strapped with a safety belt and enclosed in the vehicle.

That may have been the case on the continent, but here in Blighty a helmet was required.

The Sidewinder fell into the old definition of a sidecar simply because it was 'capable of carrying a load', and 'load' was never defined in the legislation. It became obsolete when the law regarding sidecars was changed.

I had one on a 400 superdream. It would take a small load strapped to it, all the cones
for the part 1 test on one occasion. It handled quite well to be honest, up to & above
the speed limit. They did not like pot holes or large bumps, due to low weight allowing
them to bounce easily. The 400 was a far better machine than a 125 for the ride between
Portsmouth & Colchester each weekend. I gave it to a mate who put it on a Kawasaki Z550.
They didn't work as a sidestand, as the lad found out, as we watched his bike fall over after
forgetting to put the stand down, & yes we did try to warn as he got off & walked towards
us.
Top

I never had a problem with the width, even through London on a Friday
afternoon. Being a learner had it's drawbacks when traveling longer distances

There was one fitted to a Kawa 900 in Ipswich.

I tried to be normal once, worst two minutes of my life.
Blue belt in Serious tea drinking.

And a VW trike so I don't fall off

Users browsing this forum: No registered users and 7 guests